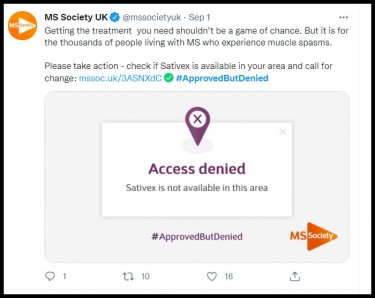 On August 18, MS Society UK with the support of the Daily Express and other Sativex advocates launched the #ApprovedButDenied cannabis campaign.

This is an oromucosal cannabis-derived spray that is used to treat multiple sclerosis symptoms. It contains THC and CBD in equal amounts. Sativex got licensed in 2010 and the UK approved its use for adult MS patients in 2019.

Patients are asked to spray the treatment beneath their tongue or on the cheeks. It is often advised that the drug should not be sprayed continuously in the same spot to prevent irritations.

A patient can be prescribed as much as 12 sprays a day depending on the frequency of spasms experienced.

Tests have shown that Sativex does not work for everyone, but when it does, it can be very potent and bring relief in as little time as possible.

Currently, the UK funds Sativex treatments in only 49 health bodies out of a total of 106. This means that 57 local health bodies, also known as Clinical Commissioning Bodies (CCB),  do not prescribe Sativex to their MS patients.

During the pandemic, a lot of MS patients could not get the support and care they needed from their local NHS. This was partly because the hospitals were swarmed with COVID-19 cases.  Mostly it was due to the distribution system that states that a person’s locality determines if he will be eligible for the drug.

MS patients go through a lot and their treatment should not be dependent on where they live.

The Postcode Lottery For Sativex Is Unacceptable

In the UK, the postcode lottery system determines whether or not a patient is eligible for a dose of Sativex. The patients have gotten tired of this system and want a change.

A person’s access to affordable and proper healthcare should be a thing of urgency and not left to chance. The postcode lottery system is more or less a game of chance.

Recently, the National Institute for Health and Care Excellence (NICE) estimated that up to 4,800 people were eligible for a Sativex trial.

The trial was to test the effectiveness of Sativex in different patients and it took four weeks to conclude. Less than 650 participants were tested, due to the unavailability of Sativex in major health centers.

The MS society launched this campaign on behalf of thousands of MS patients who are unable to get Sativex due to their location in the country.

This campaign calls on people suffering from muscle spasms, regardless of where they find themselves in the UK. It also calls on every other person with friends and family members that are suffering from muscle spasms. The MS Society is begging for all to take action by contacting the local health service and also putting pressure on policymakers to enact a change in the health system.

The MS Society hopes this campaign will push the government, Local NHS bodies, and Jazz pharmaceutical (manufacturer of Sativex) to take necessary steps to make Sativex available for all.

Fredi added that people with MS are having to pay as high as £500 each month for Sativex prescriptions in private facilities. Either they do this or they live with the relentless and disabling spasms

Note that the NHS prescription costs less than £300 for the same dose that is sold at £500.  Cannabis for MS on the streets is now cheap either in the UK.

People that are unable to afford the private prescriptions are compelled to purchase cannabis products illegally—just to feel relief.

Other key members of the campaign added that it is time for a change in how MS patients are being handled. The unfair postcode lottery must end. Sativex should be accessible to all who meet the criteria for treatment.

The published campaign report included the responses gotten from interviews held with a few MS patients in the UK.

One patient named Sheila, aged 71 also spoke about the relief she felt after she started using different medical cannabis strains for MS.

She added that since she started using Sativex, her symptoms had lightened and she no longer has any spasms episodes. With Sativex, she has been able to exercise her limbs without any complications. Her fear of spasms has fizzled out.

Another patient, named Neil, said that Sativex helped him sleep well for the first time in ten years. According To Neil, he realized that he had been practically worn out due to insomnia he had experienced prior to using Sativex.

People like Sheila and Neil are real-life examples of how Sativex could help MS patients live their lives with their conditions.

Support for the campaign

Janis Winehouse understands how draining muscle spasms can be, having been diagnosed with secondary progressive MS. The 66-year-old Janis says that she has had to rely on walking sticks and a wheelchair to move around.

Simon Hoare, MP for North Dorset, also backs the campaign. He said that for the past few years the All-Party Parliamentary Group (APPG) has been campaigning for the availability of Sativex in all health centers across the UK.

“I fully support the #ApprovedButDenied campaign and call on officials of the health bodies to end drugs postcode lottery” added MP Simon.

Sativex is a life-enhancing drug that should be prescribed by all clinical commissioning groups in the UK. Local NHS bodies should secure appropriate funding for Sativex.

This campaign is a step in the right direction.

No one should be denied a chance at having an MS-free life! 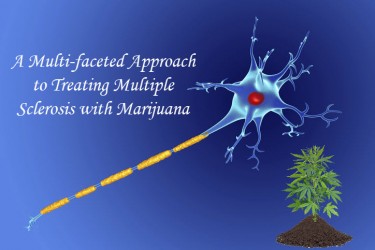 A NEW APPROACH FOR CANNABIS AND MS PATIENTS, READ THIS! 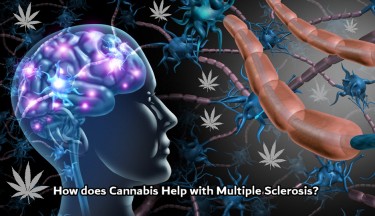 HOW MEDICAL MARIJUANA HELPS THE BRAIN WITH MS, READ HERE!