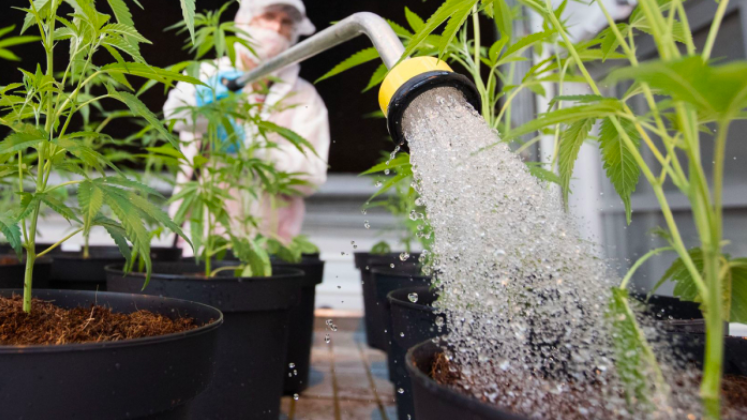 Legal cannabis grow-ops don’t use as much water as researchers previously thought, according to a study recently published in the Journal of Environmental Management.

“There is growing concern over the impacts of cannabis farms on the environment and water resources in particular, yet data on cultivation practices and water use patterns have been limited,” the study authors explain. “Estimates of water use for cannabis cultivation have previously relied on extrapolated values of plant water demand, which do not account for differences in cultivation practices, variation across the growing season, or the role of water storage in altering seasonal extraction patterns.”

These early estimates suggested that cannabis farms might be using up a large amount of the Golden State’s limited water resources, but the study found that these concerns were overstated. On average, a legal pot cultivator uses the same amount of water as a tomato farmer. And while the average vegetable farm sprawls out over thousands of acres, most weed farms occupy less than half an acre of land.

“Our research hasn’t found cannabis to be particularly thirsty relative to other crops,” said Cannabis Research Center co-director and study co-author Ted Grantham to the PPIC Water Policy Center. “And cannabis farms are considerably smaller than other crops—on average, about a quarter acre. So, cannabis has a very small footprint and accounts for just a fraction of the water used by California agriculture overall.”

Natalynne DeLapp, executive director of the Humboldt County Growers Alliance, told the Times-Standard that this research is “really timely given how important these conversations are right now,” especially now that the state is in the midst of a serious drought. “I think some people have an idea that cannabis is a particularly thirsty plant and it’s never been true. Now that we’re a few years into legalization and have more data, it’s good to see that reflected in the academic research.”

“Many farmers are feeling anxious about the drought and are concerned about the long-term impacts of climate change on our community and the environment,” she added. “There’s also an understanding that we’re likely to see more of this in the future and so there’s a lot of interest in long-term climate resiliency planning which includes increased water storage capacity and improved water efficiency measures.”

Unfortunately, the present research only focuses on legal cultivators, which only represent a small portion of all the weed currently grown in California. Recent estimates suggest that illicit weed farms produce more than 10 million tons of black market weed each year, and these grows are not required to comply with the state’s existing water regulations. To make matters worse, most of these farms also use toxic pesticides that can poison the surrounding land, kill local wildlife and seep into waterways.

“We’re approaching 8,000 legal cannabis farms in the state, including permitted indoor and outdoor growing facilities. But most farms statewide are not permitted,” said Cannabis Research Center co-director Van Butsic to the PPIC. “To give you a sense of scale, we estimate that Humboldt and Mendocino counties alone had around 15,000 illegal farms in 2018.”

“Cannabis regulations are oriented toward reducing water use impacts—including restrictions on when growers can divert from streams and requirements to use onsite storage if they rely on surface water sources. However, unpermitted farms don’t necessarily follow these practices,” Grantham explained. “If a grow operation is legal, the water source will be legal (and managed). For illegal grows, it is not clear where water is coming from.”

For future research, the study authors hope to collect data from these illegal farms in order to boost the “overall understanding of cannabis water-use practices and consequences for the environment.”