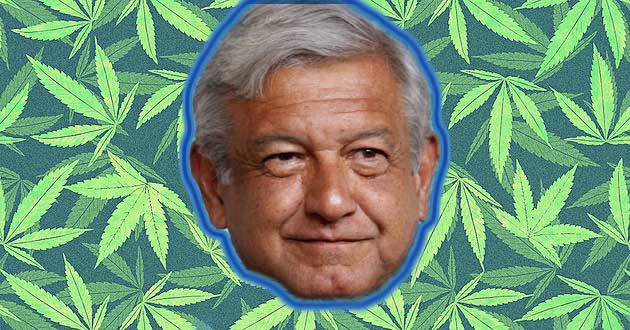 The day after a critical Supreme Court ruling against cannabis prohibition, Mexican President Andrés Manuel López Obrador indicated a hesitancy to accept ending the prohibition of the plant. He even went as far to say that his government might introduce a law or initiate a voter’s referendum to reverse the process under certain conditions.

“We’re going to see what effects [decriminalization] has,” the president told reporters, adding that his administration would take steps to reverse the policy “if we see that it doesn’t help, that it’s not good for the country, that it’s not good at treating addiction, at stopping violence, we will act.”

The leader also indicated that he might move against any legalization of a commercial cannabis industry, cautioning those who see a business opportunity in Mexican marijuana that, “You can’t traffic in the health of the people.”

In a country in which 60 percent of the population is opposed to cannabis legalization, the nominally-leftist president has had a tumultuous relationship with ending prohibition. AMLO hinted at legalization and a de-militarization of the War on Drugs during his 2018 campaign, even appointing decriminalization advocate Olga Sánchez Cordero to his cabinet.

But in office, he has expressed decidedly prohibitionist views. Tellingly, his Morena Party, which controls both legislative houses, has failed to pass regulatory legislation for cannabis despite having been instructed to do so by the Supreme Court in 2018.

The president’s views may be complicated by his faith; just days before June’s midterm elections, AMLO came out as an evangelical Christian, a faction not known for its support of drug decriminalization.

In 2019, AMLO met with Christian groups to discuss subsidizing “just say no to drugs” spots by the religious organizations on broadcast television. The federal government’s subsequent, ominous anti-drug campaign has been criticized for demonizing substance users.

“60% of those who lose their lives daily, 60% of people murdered in shootings show signs that they were under the effects of drugs or alcohol,” the president said, failing to cite a source for the statistic.

The Supreme Court’s declaration of unconstitutionality upholds its previous findings that personal consumption and cultivation of cannabis is a constitutional right. Individuals will likely need to apply to the federal health agency for a license to grow and consume, and the decision does not take the place of comprehensive legislation on the matter, which must be created by lawmakers.

Mexico City Mayor Claudia Sheinbaum indicated her approval for the resolution, adding that she hopes legalization will end the criminalization of youth for cannabis-related charges.

Versions of legalization bills have been approved by both the Senate and lower legislative house. They have not been able to reach an agreement on many key issues, from social justice measures to which federal agencies will regulate cannabis. On April 30th, the Senate missed the Supreme Court’s third deadline for regulating legal cannabis, and neglected to petition for a deadline extension as they have in the past.

Both legislative drafts approved by legislators included regulations outlining the formation of a commercial industry, which promises to be one of the largest in the world, as there are over 90 million adults in the country.

Though AMLO’s Morena Party did lose legislative seats in the recent elections, the president is still generally regarded as the final word on the country’s political direction. With his comments, AMLO cast doubt on the viability of Mexican cannabis legalization.

“We’re going to evaluate what happens,” the president said. “This is why I’m a believer in participatory democracy.”